The store will not work correctly in the case when cookies are disabled.

Will be delivered within 2 to 5 business days.

Pay SAR29.14 for 36 months, for more info please and how to apply please click here. 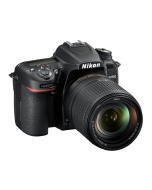 The BOYA BY-WM8 Pro is upgraded addition of UHF Dual-Channel Wireless Microphone System and can be used to capture audio for live sound, ENG, broadcast and film, talk shows, conferences and more.

The BY-WM8 Pro-K1 system consists of a bodypack transmitter, a camera-mount receiver, and two omnidirectional lavalier microphones. Also included with this system is a shoe-mount adapter, a single 1/8" to XLR output cable, a single 1/8 to 1/8" output cable, carrying case.

The camera-mountable receiver features a wide-switching RF bandwidth, an easy-to-read LCD display and a 3.5mm headphone jack for real-time monitoring. And the bodypack transmitter is equipped with a crystal-controlled PLL synthesizer, a muting function, a 1/8" mic input and a 1/8" line-in jack.