The store will not work correctly in the case when cookies are disabled.
All Categories 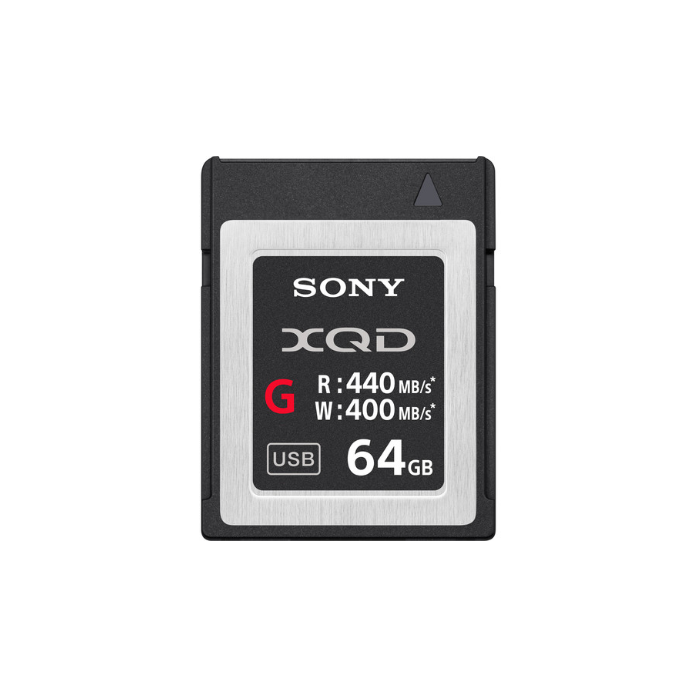 Sony QD-G64E 64GB XQD G Series memory card by Sony is a great improvement from the previous versions. With advanced technology, Sony has proven to be at par by producing a quality and durable memory card that lasts longer and has a larger capacity. The new and improved memory card is compliant to XQD format Version 2. This means that the Sony memory card can access data files in the same way a flash memory card does.

This makes the data in the memory card more accessible from different devices. On top of this, the newly designed format for the Sony memory card, XQD, is mostly utilized for high definition camcorders and high-resolution cameras. This makes the Sony QD-G64E most convenient for these high-quality recordings and photos. The Sony memory card has expanded to a maximum of 256GB which is a very large memory space even for high quality videos and high-resolution images.

Sony QD-G64E 64GB memory card is well designed to support recording of 4K video and also avoid speed degradation during fast motion recording. The Sony QD-G64E 64GB XQD Memory cards are very convenient and beneficial. Here are some of the new features the new model has.

Sony QD-G64E 64GB XQD G Series is modified with USB 3.0 and PCI Express Gen 2. Technology to improve effectiveness and promote high performance. This modification allows for easier and high-quality recording. The Sony QD-G64E maintains a reading speed of 440 mb/s and a writing speed of 400 mb/s which makes recording and saving of high quality videos much faster. The Sony XQD G series is also created to last a long time.

The outer body of the memory card is hard and durable to persist against tough conditions. This means that video takers don’t have to worry about harsh conditions in the film-shooting location. Sony XQD G series memory cards are designed to be shockproof, resistant to breaking, anti-static and magnet proof to preserve the memory card and data inside it against damage.

Modifications made on the Sony XQD G Series Memory Card

Sony QD-G64E 64GB memory card has gone through plenty of modifications to accommodate the high-quality recording tasks of Sony camcorders. The Sony memory card features intelligent controllers which have error correction code, wear levelling and data refresh which improve data saving and recording in the memory card. With the G series, you can have a lot of improved functions on your Sony camcorder.

For instance, you can get the most of burst shooting owing to the fast writing and reading speed of the Sony XQD G series memory card. Shooting rapidly moving images requires the camera and memory card to have a high level of processing in order to perfectly capture the image. The burst shooting with a Sony G series memory card can capture up to 200 RAW images. Hi-end DSLR is also easy to achieve with the new Sony XQD G series.

Where to use the Sony XQD G Series Memory Card

Sony QD-G64E 64GB memory cards can be used in professional activities due to its fast reading and writing speed in different camera and video coding devices. Conveniently, the memory card comes in different memory sizes to cater for the needs of the user. Ranging from a massive 32GB to 256 GB, the Sony G series memory card can be used for almost any recording that has to be done for a long period.

Sony G series memory card can be used in event recording and live shows which will magnify the memory card’s capacity of shooting quality and high-end videos. The G series can also be taken for hiking or during a road trip to capture those beautiful landscapes that you admire.

With the 4K’s 3,840 X 2,160 pixels capacity, any image that is shot and saved on the XQD G series Sony memory card is sure to be as clear and detailed as possible.